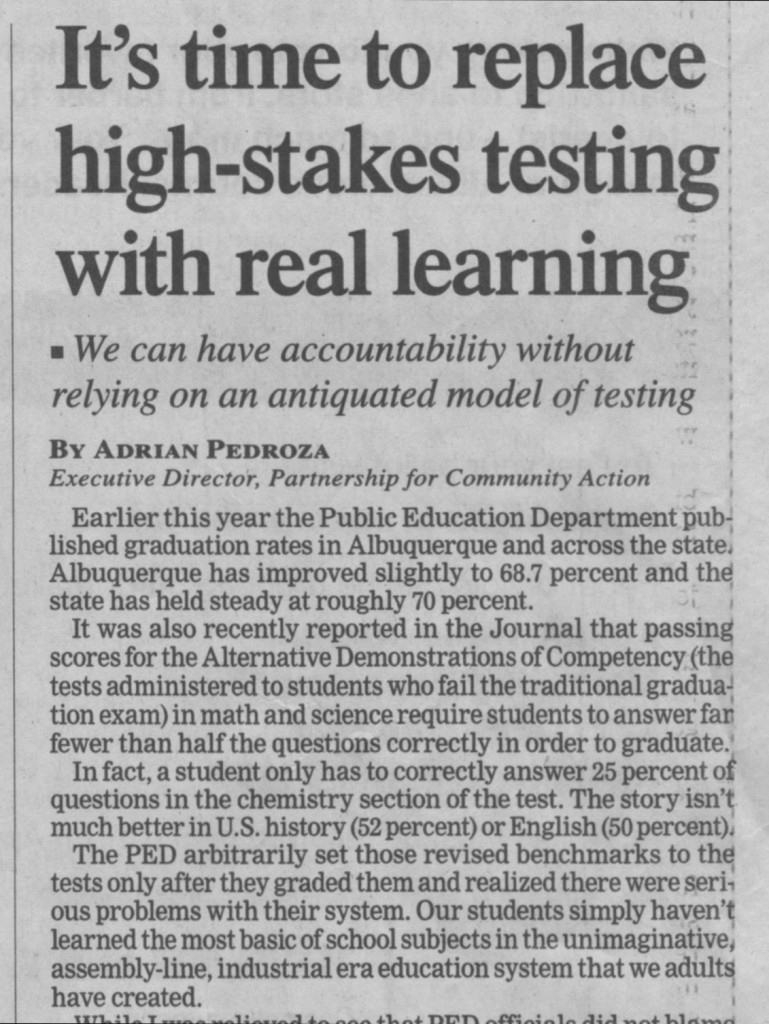 Adrian Pedroza, PCA’s Executive Director, recently published an Editorial that was featured in the Albuquerque Journal. The editorial offers insight into education in New Mexico. The full editorial is below:

Earlier this year the Public Education Department (PED) published graduation rates in Albuquerque and across the state.  Albuquerque has improved slightly to 68.7 percent and the state has held steady at roughly 70 percent.  It was also recently reported in The Journal that passing scores for the Alternative Demonstrations of Competency (ADC) (the tests that’s administered to students who fail the traditional graduation exam) in Math and Science require students to answer far fewer than half the questions correctly in order to graduate.

In fact, a student only has to correctly answer 25 percent of questions in the Chemistry section of the test. The story isn’t much better in US History (52 percent) or English (50 percent).  The PED arbitrarily set those revised benchmarks to the ADC only after they graded the tests and realized that there were serious problems with their system.  Our students simply haven’t learned the most basic of school subjects in the unimaginative, assembly-line, industrial era education system that we adults have created.

While I was relieved to see that the PED officials did not blame the students for their flawed system, I was also dismayed that they didn’t take responsibility for overseeing a school system that cannot compel our students to learn. Instead, they doubled down on the legitimacy of the tests claiming that they were challenging our students and insinuated that the dismal test scores should be expected.  From the looks of it,  they were quick to change their own standard for quality to avoid the public blow back that would have resulted from the  fiasco of failing thousands of our children.

I believe in standards and accountability, but most of all I believe that our most important objective should be to design school systems that allow young people to learn.  Unfortunately for our students, standardized testing may be efficient but it is also bankrupt as a primary organizing principal for our schools. We have been beating the high stakes accountability drum since before the federal No Child Left Behind legislation was passed and our students are falling further and further behind by all national and international standards.  The move to Common Core national standards has promise, but only if learning is not driven by antiquated assessments that promote a system that forces teachers to narrow what they teach and what students learn.

I have been a witness to the death of the industrial-era model in nearly every area of our lives. Yet, our strategies for improving schools are still following that antiquated production system.  Our governor’s theory is built on compelling schools, teachers, and students to succeed, then she punishes them when they fail. Yet, even when her own system can’t produce the results that she desires, she changes the facts to fit reality. In other words, our governor couldn’t stomach the political fallout of all those high school seniors who under her newly created system wouldn’t have earned a diploma, so she simply changed the system to fit her reality. I wonder what the graduation rate would be if students actually had to pass the Alternative Demonstration of Competency exam?

We have given the reins to technocrats that have not seen the inside of a school since they themselves graduated from high school.  The accountability theory behind their strategy of high stakes testing is devoid of the actual practice of teaching and learning.  As a result, they have designed a system of schools that is backwards. They have under invested in human capital by inadequately preparing teachers for the new world and de-professionalized them at every turn. We now have children that learn less than ever because we have tied our teacher’s hands and forced them to teach a narrow and uninspired curriculum. Do we have the courage to change the education paradigm from high stakes testing to high stakes learning- where students are once again inspired to learn?

Adrian Pedroza is the Executive Director of the Partnership for Community Action an education and advocacy organization, supporting people and families become effective leaders in our neighborhoods and building strong, healthy communities across our state.